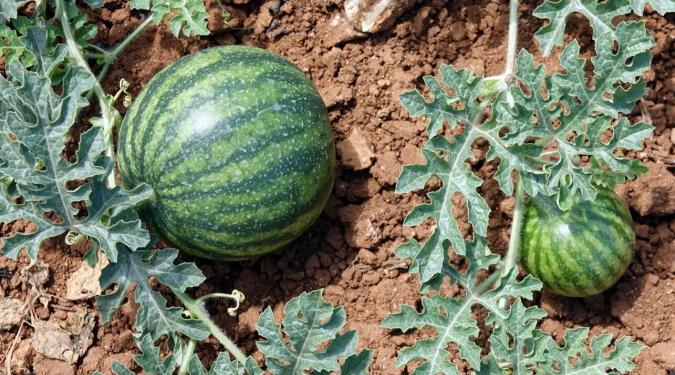 To cover the needs of the GWD project's pilot implementation, three experimental fields were selected in the area of Trifylia, N. Messinia (Fig. 1.)

The selection of the cultivations was based on the following criteria

The soil of the region consists of sand and clay, ideal for early watermelon. It is slightly acidic, with low calcium levels and medium organic matter content. Black plastic is used for the ground, white plastic is used to cover the early stages of the plant development, while net is used for hail protection. These materials have been recycled during last years.

Soil sampling was conducted in the experimental fields to determine the mechanical texture of the soils (Soil texture classification). The results of the grading are presented in three depths in Fig. 2.

The cultivation of watermelon is significantly extensive (600 ha) in Trifylia, having an annual production of 45,000 tons, and constitutes 20% of Greece's production of exportable watermelon. The fact that the region of Trifylia produces the earliest watermelon in Europe, makes the product even more competitive. The biggest part of the production is exported to 27 countries throughout Europe (Germany, Czech Republic, Slovakia, Croatia, all Balkan countries, Italy, United Kingdom). The production process, is certified through various National, European and International standards. As a result, the added value of the product, which is tested for safety and quality, but also for the environmental protection of the area during the cultivation process, has been increased. The initial stage of cultivation starts with the planting in February, reaching its maximum growth until the end of April and its harvest takes place at the end of May. It is estimated that the water demands of the watermelon during a growing season reach 100 – 110 m3 / decare, while the irrigation takes place using medium to good quality water from private boreholes. Watermelon cultivation is under integrated management, without using any additional chemicals in the soil.

The cultivation of outdoor potatoes is one of the main crops found in Trifylia, as its production area reaches 300 hectares. The production is mainly distributed in the internal market, while a small part of it is intended for export. Its yield is about 3 tons / decare and the total production that amounts to 8-9,000 tons, constitutes about 5% of the domestic production. Spring (early) potatoes cultivation starts in late January with planting, reaching its maximum growth in early to mid-April and finally, gets harvested, during the first weeks of May. Autumn potato cultivation starts with planting at the end of August-beginning of September, reaching its maximum growth until mid-October, while it gets harvested at the beginning-mid of November. It is estimated that the water demands of potato reach 200 m3 / decare.

Outdoor tomato which is also one of the main crops in Trifylia as the cultivated area amounts to 250 hectares. The mid-early tomato cultivated in the area is planted at the end of May, reaching its maximum growth in the mid to end of June, while the last harvest takes part by the end of July. It is estimated that the water demands of tomato during a growing season amounts to 340 – 350 m3/decare.